— Indomie diplomacy: How inflation drove Jokowi to Kyiv and Moscow

— Laos grabs for Russian lifeline as it fights fuel shortage

— Russia move on Sakhalin-2 thrusts Japan into an energy dilemma

3:46 p.m. U.S. Secretary of State Antony Blinken meets with Chinese Foreign Minister Wang Yi on the Indonesian island of Bali. The two top diplomats held their first face-to-face talks on the sidelines of the Group of 20’s ministerial meeting since last October and Russia’s invasion of Ukraine in February this year. “In a relationship as complex and consequential as the one between the United States and China, there is a lot to talk about,” Blinken said as the two top diplomats began the meeting. Wang said, “We do need to work together to ensure that this relationship will continue to move forward along the right track.”

3:00 p.m. Russia is moving reserve forces from across the country and assembling them near Ukraine for future offensive operations, British military intelligence says. A large proportion of the new Russian infantry units are probably deploying with MT-LB armored vehicles taken from long-term storage as their primary transport, Britain’s Ministry of Defense tweeted in a regular bulletin.

3:20 a.m. The U.S. will send another $400 million in military aid to Ukraine, including more HIMARS missile launchers, the Financial Times and others report, citing a senior defense official.

Four more High Mobility Artillery Rocket Systems will be delivered to help Ukrainian forces, the official is quoted as saying.

“If the Russians think they can outlast the Ukrainians, they need to rethink that because we are already pivoting toward thinking what the Ukrainians need in the months and years ahead,” the official says.

11:55 p.m. Russia warns Lithuania and the European Union of “harsh measures” it could use against them if the transit of some goods to and from the Russian exclave of Kaliningrad did not resume.

“If the situation does not stabilize in the coming days, then Russia will take harsh measures against Lithuania and the European Union,” Maria Zakharova, Russian Foreign Ministry spokesperson, says, according to Reuters. “The issue has taken too long to resolve.”

Lithuania has banned the transit of goods subject to EU sanctions across its territory to and from the Baltic exclave.

6:40 p.m. Russia has used only a small portion of its potential in its “special military operation” in Ukraine, Kremlin spokesman Dmitry Peskov tells reporters. President Vladimir Putin said on Thursday that Russia had barely started in Ukraine and dared the West to try to defeat it on the battlefield, while insisting that Moscow was still open to the idea of peace talks. “Russia’s potential is so great that only a small portion of it is being used in the special operation,” Kremlin spokesperson Dmitry Peskov said in a conference call with reporters. Smoke rises over Donetsk, Ukraine, after shelling amid the Ukraine-Russia conflict on July 7.

6:15 p.m. U.S. Treasury Secretary Janet Yellen this month will visit the Indo-Pacific and use the trip to make the U.S. case for a price cap on Russian oil aimed at reducing revenue to the Kremlin. Yellen will address the economic and humanitarian challenges wrought by Russia’s war in Ukraine as she represents the U.S. at G-20 finance minister meetings on the Indonesian island of Bali and makes additional stops in Tokyo and Seoul. During the July 12-19 trip, Yellen will notably avoid visiting China, although she did hold a call with China’s vice premier on Monday.

4:50 p.m. U.S. Secretary of State Antony Blinken addressed Russia directly at the G-20 foreign ministers meeting in Bali and called on Moscow to let Ukrainian grain out to the world, Reuters reports citing a Western official. Blinken spoke at a plenary session of the meeting, which was focused on food and energy insecurity, said the official, who did not want to be identified. “He addressed Russia directly, saying: ‘To our Russian colleagues: Ukraine is not your country. Its grain is not your grain. Why are you blocking the ports? You should let the grain out,'” the official said. 3:30 p.m. Russian Foreign Minister Sergey Lavrov dismisses what he cast as the West’s “frenzied” criticism of the war in Ukraine at a G-20 meeting, scolding Russia’s rivals for scuppering a chance to tackle global economic issues. “During the discussion, Western partners avoided following the mandate of the G-20, from dealing with issues of the world economy,” Lavrov said. He said the West’s discussion “strayed almost immediately, as soon as they took the floor, to the frenzied criticism of the Russian Federation in connection with the situation in Ukraine. ‘Aggressors,’ ‘invaders,’ ‘occupiers,’ — we heard a lot of things today,” Lavrov said.

12:52 p.m. Indonesia urges the G-20 to help end the war in Ukraine, as foreign ministers from the group gather for a meeting that has put some of the staunchest critics of Russia’s invasion in the same room as Russian Foreign Minister Sergey Lavrov. The buildup to the gathering on the Indonesian island of Bali has been dominated by the war and its impact on the global economy, with top officials from Western countries and Japan stressing it would not be “business as usual” at the forum. Indonesian Foreign Minister Retno Marsudi said at the opening of talks, “It is our responsibility to end the war sooner than later and settle our differences at the negotiating table, not on the battlefield.” Russian President Vladimir Putin, in remarks to Russian lawmakers on July 7, said the West was welcome to try to beat Russia militarily, but that this would harm Ukraine. (Kremlin via Reuters)

7:00 a.m. Russian President Vladimir Putin accuses the West of decades of aggression toward Moscow and warns that if it wants to attempt to beat Russia on the battlefield it is welcome to try, but this would bring tragedy for Ukraine. His remarks came as Russian Foreign Minister Sergey Lavrov prepared for a closed-door foreign ministers’ meeting at a G-20 gathering in Indonesia on Friday. “We have heard many times that the West wants to fight us to the last Ukrainian. This is a tragedy for the Ukrainian people, but it seems that everything is heading toward this,” Putin said in televised remarks to parliamentary leaders.

“We are sincerely grateful for the decisive and uncompromising help since the first days of the war,” Zelenskyy says in a Facebook post. “I thank you in particular for the leadership in defending the interests of Ukraine in the international arena.” 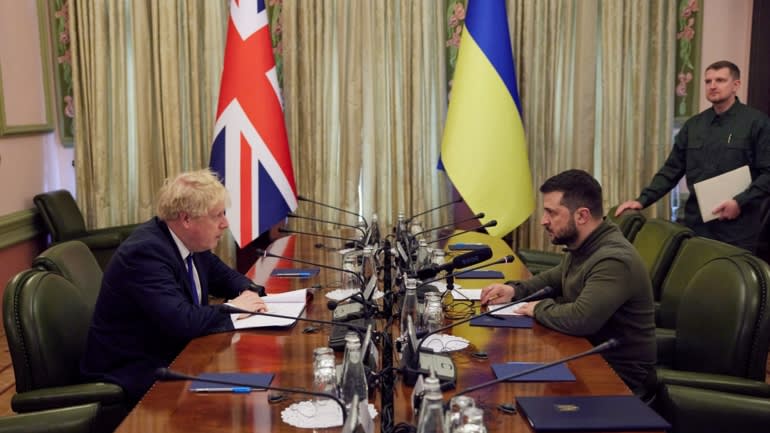 1:53 a.m. U.S. basketball star Brittney Griner pleads guilty to a drugs charge in a Russian court but denies she intentionally broke the law. Griner was speaking at her trial on the narcotics charge carrying a sentence of up to 10 years in prison, days after she urged U.S. President Joe Biden to secure her release.

Griner, a two-time Olympic gold medalist, was detained in February at Moscow’s Sheremetyevo airport after authorities found what they said were vape cartridges containing hashish oil. She has been kept in custody since.

“An Army of Drones will allow us to constantly monitor the 2,470 km long frontline and provide an effective response to enemy attacks,” the donation website says.

Fedorov doubles as Ukraine’s minister of digital transformation and is known for reaching out to Tesla chief and SpaceX founder Elon Musk with a request for Starlink satellite phones.

5:50 p.m. Pavel Zavalny, head of the energy committee in Russia’s lower house of parliament, says that the Sakhalin-1 oil and gas project in the country’s far east will be put under Moscow’s jurisdiction, as has the neighboring Sakhalin-2. President Vladimir Putin last week signed a decree enabling the seizure of full control of the Sakhalin-2 gas and oil project, a move that could force out investors including Shell and Japanese entities. Four companies — Rosneft, ExxonMoobil, Japan’s SODECO and India’s ONGC Videsh — are partners in the Sakhalin-1 group of fields. ExxonMobil decided to pull out from the project in March. 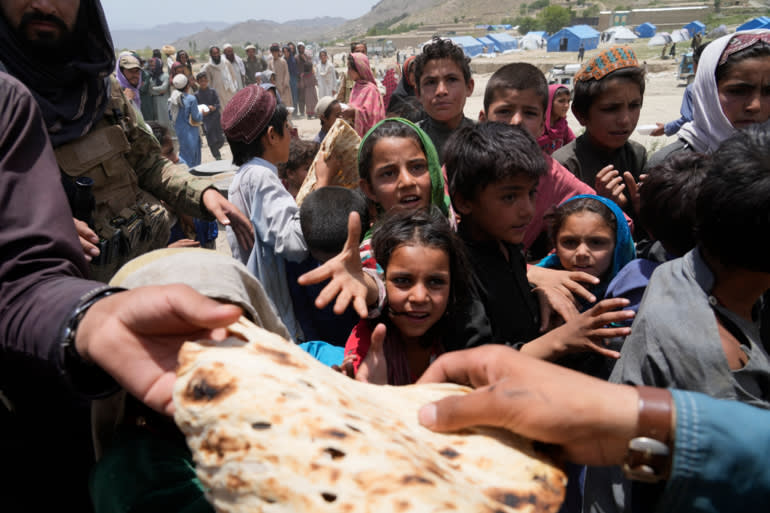 Afghans receive aid at a camp in the province of Paktika on June 26 following an earthquake. The United Nations Development Program said July 7 that the number of people living off $1.90 a day or less grew to 9% of the global population in the first three months after the Ukraine war.

3:30 p.m. A staggering 71 million more people around the world are experiencing poverty as a result of soaring food and energy prices that climbed in the weeks following Russia’s invasion of Ukraine, the United Nations Development Program says in a report. The UNDP estimates that 51.6 million more people fell into poverty in the first three months after the war, living off $1.90 a day or less. This pushed the total number globally at this threshold to 9% of the world’s population. An additional 20 million people slipped to the poverty line of $3.20 a day. “The cost-of-living impact is almost without precedent in a generation … and that is why it is so serious,” UNDP Administrator Achim Steiner said at the launch of the report.

11:00 a.m. Former Russian President Dmitry Medvedev says attempts by the West to punish a nuclear power such as Russia for the war in Ukraine risk endangering humanity. “The idea of punishing a country that has one of the largest nuclear potentials is absurd. And potentially poses a threat to the existence of humanity,” Medvedev, now deputy chairman of the Russian Security Council, said on Telegram on Wednesday. Russia’s invasion of Ukraine has triggered the most serious crisis in relations between Russia and the West since the 1962 Cuban Missile Crisis, when many people feared the world was on the brink of nuclear war.

7:23 a.m. Spikes in the prices of food, fuel and fertilizer sparked by the war in Ukraine are threatening to push countries around the world into famine, bringing “global destabilization, starvation and mass migration on an unprecedented scale,” a top U.N. official warns. David Beasley, head of the U.N. World Food Program, said its latest analysis shows that “a record 345 million acutely hungry people are marching to the brink of starvation” — a 25% increase from 276 million at the start of 2022, before Russia invaded Ukraine on Feb. 24. The number stood at 135 million before the COVID-19 pandemic in early 2020.

More than 424 million faced hunger in Asia in 2021, according to the latest State of Food Security and Nutrition in the World (SOFI) report.

Gotabaya Rajapaksa tweets that he had a “very productive” phone call with Putin.

“I requested an offer of credit support to import fuel,” Rajapaksa adds. He writes that he asked for Russian airline Aeroflot to resume operations in Sri Lanka.