5:15 a.m. Ukraine rules out agreeing to a ceasefire with Russia and says Kyiv would not accept any deal with Moscow that involved ceding territory. Admitting Kyiv’s stance was becoming more uncompromising, presidential adviser Mykhailo Podolyak says making concessions would backfire because Russia would hit back harder after any break in fighting. “The war will not stop” after any concessions, he tells Reuters. “It will just be put on pause for some time.”

Podolyak describes as “very strange” calls in the West for an urgent ceasefire that would involve Russian forces remaining in territory they have occupied in Ukraine’s south and east. Russian “forces must leave the country and after that the resumption of the peace process will be possible,” he says.

11:35 p.m. Turkish President Tayyip Erdogan, who has objected to Sweden and Finland joining NATO, holds phone calls with the leaders of the two countries and discusses his concerns about terrorist organizations. The two Nordic countries are seeking to join the alliance over concerns of Moscow’s aggression as Russia wages a war with Ukraine.

During his call with Finnish President Sauli Niinisto, Erdogan says failing to deal with terrorist organizations that posed a threat to a NATO ally would not suit the spirit of alliance.

4:12 p.m. Representatives of five economies, including Japan and the U.S., walked out of a meeting by trade ministers from the Asia-Pacific region on Saturday, the opening day of a two-day conference in Bangkok, in protest against Russia’s invasion of Ukraine, Japanese officials say. Ministers from Japan, the U.S., Canada, Australia and New Zealand exited the room when Maksim Reshetnikov, Russia’s economic development minister, started delivering his remarks during a morning session.

2:00 p.m. Russia’s Gazprom has halted gas exports to neighboring Finland, the Finnish gas system operator says, the latest escalation of an energy payments dispute with Western nations. Gazprom Export has demanded that European countries pay for Russian gas supplies in rubles because of sanctions imposed over Moscow’s invasion of Ukraine, but Finland refuses to do so. “Gas imports through [the] Imatra entry point have been stopped,” Gasgrid Finland said in a statement. Imatra is the entry point for Russian gas into Finland. Firefighters tackle a blaze at an oil refinery following a missile attack near the port city of Odesa in April. Ukrainian President Volodymyr Zelenskyy is now calling for a formal deal with the country’s allies to secure Russian compensation for damage caused during the war.

8:00 a.m. Ukrainian President Volodymyr Zelenskyy has proposed a formal deal with the country’s allies to secure Russian compensation for the damage its forces have caused during the war. Zelenskyy, who says Russia is trying to destroy as much of Ukraine’s infrastructure as it can, said such a deal would show nations planning aggressive acts that they would have to pay for their actions.

“We invite partner countries to sign a multilateral agreement and create a mechanism ensuring that everybody who suffered from Russian actions can receive compensation for all losses incurred,” he said in a video address. Under such a deal, Russian funds and property in signatory nations would be confiscated, and would then be directed to a special compensation fund, he said.

7:15 a.m. Russia claims to have captured Mariupol in what would be its biggest victory yet in its war with Ukraine, after a nearly three-month siege that reduced much of the strategic port city to a smoking ruin, with over 20,000 civilians feared dead. Russian Defense Minister Sergei Shoigu reported to President Vladimir Putin the “complete liberation” of the Azovstal steel plant in Mariupol — the last stronghold of Ukrainian resistance — and the city as a whole, spokesman Igor Konashenkov said. There was no immediate confirmation from Ukraine.

4:00 a.m. Wimbledon is stripped of its ranking points by the ATP and WTA tours over its decision to exclude players from Russia and Belarus at the 2022 Championships due to Moscow’s invasion of Ukraine. The governing bodies of tennis have banned Russia and Belarus from international team competitions but let players from the two countries compete as neutrals.

Separately, 51 Ukrainian athletes have died since Russia’s invasion began, the International Olympic Committee reported at a meeting in Switzerland. They include a promising female gymnast in her teens.

2:30 a.m. Ukraine wants Japan to impose a total import ban on Russian oil and gas, and to more fully participate in the squeezing of funds that might otherwise flow into Moscow’s war chest

“We need a full oil and gas embargo,” Marchenko says in an interview with Nikkei. “Russia receives money [from oil and gas exports] and can spend this money on military aggression toward Ukraine.” Read more.

12:20 a.m. Former German Chancellor Gerhard Schroeder has resigned as chairman of the board of Russian state-owned oil group Rosneft, the latest development in the controversy over his close relationship with Moscow.

Former German intelligence officer Matthias Warnig has also stepped down from the board, German and other media report, citing a statement from Rosneft.

Gasum, which had warned Wednesday that Russian supplies could be cut, says it will continue to supply gas to Finnish customers from other sources through the Balticconnector pipeline linking Finland with Estonia. Most supply contracts are denominated in euros or dollars, but Gazprom Export has demanded that European countries pay in rubles because of sanctions imposed over Moscow’s invasion of Ukraine.

Natural gas accounts for only a small part of Finland’s household energy use but a larger share of industrial power. 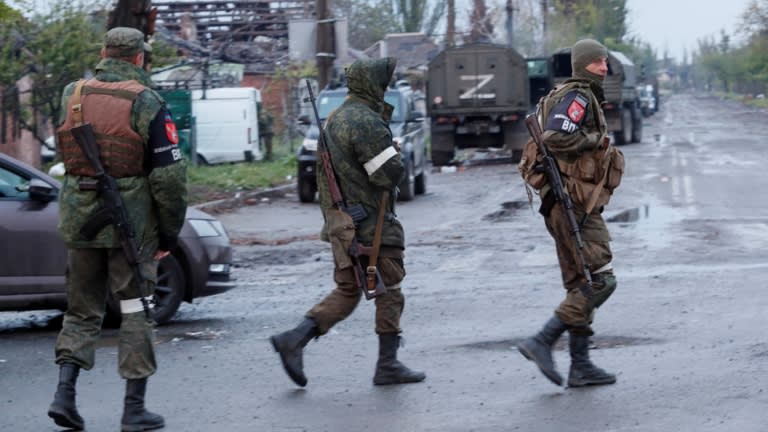 Pro-Russian troops in Mariupol on May 19, 2022, after Ukrainian soldiers finally surrendered at the besieged Azovstal steel mill.

5:31 p.m. In a sign of Russia’s urgent need to bolster its war effort in Ukraine, its parliament says it will consider a bill to allow Russians over the age of 40 and foreigners over 30 to sign up for the military. The website of the State Duma, parliament’s lower house, said the move would enable the military to utilize the skills of older professionals. “For the use of high-precision weapons, the operation of weapons and military equipment, highly professional specialists are needed. Experience shows that they become such by the age of 40-45,” it said. Previously only Russians aged 18 to 40 and foreigners aged 18 to 30 could enter into a first contract with the military.

2:30 p.m. Russian shelling in Ukraine’s eastern region of Luhansk has killed 13 civilians over the past 24 hours, the regional governor, Serhiy Gaidai, says. Twelve were killed in the town of Sievierodonesk, where a Russian assault has been unsuccessful, he said. The town and the city of Lysychansk are in an area where Russian troops have launched an offensive.

2:26 p.m. Russia is likely to reinforce operations in the industrial Donbas region once they secure the city of Mariupol, British military intelligence says. As many as 1,700 soldiers are likely to have surrendered at the Azovstal steel factory in Mariupol, the report added. Moscow also said on Thursday that 1,730 Ukrainian fighters had surrendered from the steel factory so far, including 771 in the past 24 hours.

9:01 a.m. U.S. Secretary of State Antony Blinken accuses Russia of using food as a weapon in Ukraine by holding “hostage” supplies for not just Ukrainians, but also millions around the world. Addressing the United Nations Security Council, Blinken appealed to Russia to stop blockading Ukrainian ports. “The Russian government seems to think that using food as a weapon will help accomplish what its invasion has not — to break the spirit of the Ukrainian people,” he said. “The food supply for millions of Ukrainians and millions more around the world has quite literally been held hostage.”

5:56 a.m. The U.S. Senate approves roughly $40 billion in new assistance for Ukraine — the largest American aid package yet for the country — by a lopsided 86-11 vote, clearing the way for President Joe Biden to sign it into law. All of the “no” votes come from Republicans.

1:08 a.m. Finnish President Sauli Niinisto pledges to commit to Turkey’s security if his country joins NATO and says Finland is willing to discuss all of Ankara’s concerns over its membership “in an open and constructive manner.”

“Finland has always had broad and good bilateral relations to Turkey,” Niinisto said at the White House, where U.S. President Joe Biden was hosting the leaders of Finland and Sweden following their formal applications for NATO membership. “As NATO allies, we will commit to Turkey’s security, just as Turkey will commit to our security. We take terrorism seriously. We condemn terrorism in all its forms, and we are actively engaged in combating it.”

Discussions to address Turkey’s concerns have already taken place and will continue in the coming days, Niinisto said.

12:55 a.m. McDonald’s says it has agreed to sell its restaurant portfolio in Russia for an undisclosed sum to Alexander Govor, who since 2015 has been a licensee and operated 25 restaurants in Siberia.

The world’s largest burger chain owns about 84% of its nearly 850 restaurants in Russia.

The announcement comes days after McDonald’s said it would leave the country, while retaining its trademarks, in light of the Ukraine war. In March, the company had decided to temporarily close all its restaurants in Russia and pause all operations there.