Russia has unleashed attacks on Ukraine after months of massing troops near its borders. The military action, ordered by Russian President Vladimir Putin on Thursday, amounts to a full-scale invasion, says Ukrainian President Volodymyr Zelenskyy.

Dozens of military sites have already been hit by Russian fire, and casualties are mounting. The repercussions are being felt beyond Europe as rising geopolitical risk and volatile energy and financial markets rock Asia.

For all our coverage, visit our Ukraine crisis page.

—Ukraine conflict will have a significant impact on Asia

Entries include files from wire services and Nikkei Asia reporters.

5:00 p.m. Japan’s Rakuten Group CEO Hiroshi Mikitani says the company will provide coupons for Ukrainian users to make free international calls with its Viber Out service. Viber, which the Japanese e-commerce group acquired in 2014, has 80% market penetration in Ukraine. “A social platform is what we are pursuing … so we hope a democratic government will be maintained,” Mikitani said during a Friday news conference in Tokyo.

4:33 p.m. Pakistani Prime Minister Imran Khan expresses concern over the economic fallout of the Ukraine conflict on developing countries during a meeting with Russian President Vladimir Putin in Moscow. Khan was the first world leader to meet Putin since he ordered the invasion of Ukraine, having arrived in Moscow for a previously planned visit just hours before the attack began.

4:24 p.m. Kazakh President Kassym-Jomart Tokayev and Russian Prime Minister Mikhail Mishustin discussed ways to protect bilateral ties in response to sanctions against Russia, Tokayev’s office says. Kazakhstan is closely allied with Russia and leads economic and military blocs tied to Moscow. The Kazakh tenge has plummeted along with the ruble since Russia invaded Ukraine on Thursday. 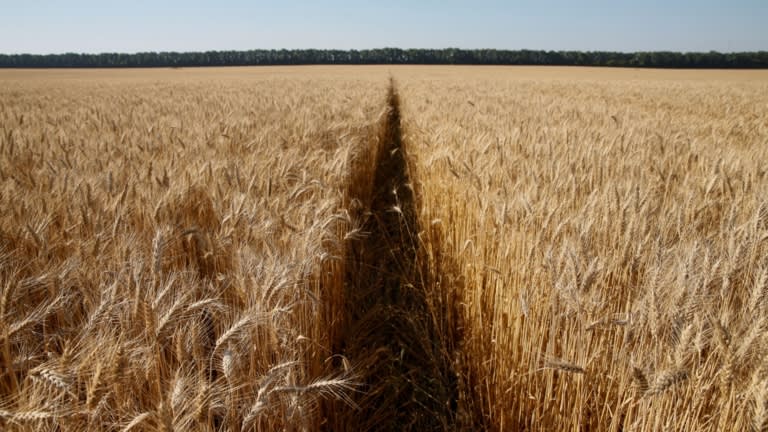 A wheat field near the Ukrainian village of Zhovtneve. Sharp rises in the price of wheat over the past few days indicate investors see a high chance that sanctions will remove Russian wheat from the market.

2:15 p.m. U.S. wheat futures hit their highest in nearly 14 years as Russia’s invasion of Ukraine stokes fears of disruptions in the supply of grain from the key Black Sea region. The most active CBOT May wheat contract was up 0.9% at $9.43 a bushel, after peaking at $9.60-3/4 earlier in the session, its highest since June 2008.

Wheat’s sharp gains over the past few days highlight that the market sees a high chance of wheat from Russia being largely sanctioned off market, said Tobin Gorey, director of agricultural strategy at the Commonwealth Bank of Australia, according to Reuters.

10:50 a.m. Australia imposes more sanctions against Russia, targeting several of its elite citizens and lawmakers. Prime Minister Scott Morrison also says it is “unacceptable” that China was easing trade restrictions with Moscow at the time when it invaded Ukraine.

10:38 a.m. Taiwan’s Premier Su Tseng-chang says the island will join democratic countries in putting sanctions on Russia over the invasion of Ukraine, although he did not give details, Reuters reports.

9:57 a.m. Japanese Prime Minister Fumio Kishida says the country will impose additional sanctions on Russia, including restrictions on chip exports. “The Ukraine invasion by Russia is a serious issue affecting international order that includes not only Europe but also Asia,” Kishida told reporters in a news conference. 8:00 a.m. U.S. Secretary of State Antony Blinken talks with Indian External Affairs Minister Subrahmanyam Jaishankar after President Joe Biden said Washington had not yet worked out its coordination with New Delhi on the Ukraine conflict.

“Secretary Blinken stressed the importance of a strong collective response to condemn Russia’s invasion and call for an immediate withdrawal and ceasefire,” according to a statement by State Department spokesman Ned Price.

Neither side provided details on what, if anything, the top diplomats agreed on.

7:00 a.m. U.S. markets swing wildly in reaction to the Ukraine conflict, setting up a turbulent trading day in Asia. The S&P 500 index closes with a gain after taking an early dive.

6:10 a.m. The European Council “condemns in the strongest possible terms the Russian Federation’s unprovoked and unjustified military aggression against Ukraine.”

5:20 a.m. The International Atomic Energy Agency issues a statement on the situation in Ukraine: “Regarding the situation at the Chernobyl Nuclear Power Plant, Ukraine has informed the IAEA that ‘unidentified armed forces’ have taken control of all facilities of the State Specialized Enterprise Chernobyl NPP, located within the exclusion zone. The counterpart added that there had been no casualties nor destruction at the industrial site. Director General [Rafael] Grossi said it is of vital importance that the safe and secure operations of the nuclear facilities in that zone should not be affected or disrupted in any way.”

5:00 a.m. Responding to the Russian attack, Indian Prime Minister Narendra Modi spoke with Putin by telephone to appeal for “an immediate cessation of violence,” according to the prime minister’s office. Read here.

4:50 a.m. U.S. President Joe Biden announces new sanctions against Russia following the invasion, trying to cripple the country’s ability to conduct business with the world and ultimately pressure the Russian president to reverse course. “Putin is the aggressor. Putin chose this war, and now he and his country will bear the consequences,” Biden tells a news conference. Read here.

11:15 p.m. Leaders from the Group of Seven advanced economies hold an emergency virtual meeting, agreeing to bring forward “severe and coordinated economic and financial sanctions” against Russia over its invasion of Ukraine.

“This crisis is a serious threat to the rules-based international order, with ramifications well beyond Europe,” they say in a joint statement issued after the summit. “We call on the Russian Federation to stop the bloodshed, to immediately de-escalate and to withdraw its forces from Ukraine.” Read here.

11:00 p.m. While the conflict unfolds in Ukraine, in Asia, Taiwan says it had scrambled jets in response to Chinese aircraft entering its air defense zone.

9:05 p.m. China’s embassy in Ukraine notifies Chinese nationals there that given the rapidly worsening situation, the embassy is preparing charter planes to fly back citizens in batches. The deadline to apply for a spot is midnight on Feb. 27.

9:01 p.m. In Turkish President Recep Tayyip Erdogan’s first comments on the Ukraine conflict, he says, “We find the military operation unacceptable and reject it.”

“This step is against international law and strikes heavy blow to the region’s peace tranquillity and stability,” Erdogan says in a televised speech, adding, “We are saddened that Russia and Ukraine, both friendly countries with which we have close political economic and social relations, are facing off each other.”

5:10 p.m. “Whether or not Putin deepens the crisis with a further shock and awe attack to conduct a regime change in Kyiv or decides to consolidate his conquests in the southeast of Ukraine, there will be a series of significant impacts in Asia,” writes Adm. James Stavridis, the 16th supreme allied commander of NATO. Read his op-ed here.

12:02 p.m. Putin addresses Russians in a televised speech, saying a “special military operation” is underway in Ukraine. He says the goal is not to occupy the country but “demilitarize” it.